October 15, 2012
Haven't updated this blog in awhile; completely forgot to.  Hawk went to his second conformation shows this weekend in Tucson.  He handled the travel well and we were prepared to show.  I showed him and he got a 2nd out of his class.  Next day I saw one of the juniors win her jr handling class and asked if she would work with Hawk and quickly show him for me.  She only had time to work with him during the altered class.  Thank God the altered class was quite large and took awhile to get through it.  She showed Hawk for me and they got another second.  After a short lunch break, it was Alexia's turn with Hawk in his puppy class.  Again our competition was Sherry Trusty's puppy who had won the 2 previous shows.  Well, Hawk outdid himself and performed a miracle with Alexia(or she performed one with Hawk); they won BOSP (Best Opposite Sex Puppy)!  What a great dog.  The next  two shows on Sunday she showed him again.  Luckily she asked if she could show him and I was glad to not have to run around the ring with nice clothes on(and look foolish).  The first show on Sunday morning he was really a brat(do not know why but he could not see me I guess and probably thought I'd left him in the dust).  But, in the afternoon show he was spot on.  Although they did not win against Shery's puppy(our competition all the shows), he listened, obeyed and obediently followed her lead.  I cannot fault anything that happened this weekend; it was perfect in every way.  I even won the 50/50 drawing to help with expenses.

Popular posts from this blog

June 20, 2020
We are planning several litters of Aussie puppies this year.  Stay tuned for updates as we know them ourselves.
Read more

June 12, 2021
Time is flying by so fast.  Expecting puppies in June and July.  Also we have had lambs and goats already.  Summer is upon us and we are trying to keep cool here in Arizona; hope you are also.
Read more
December 29, 2017 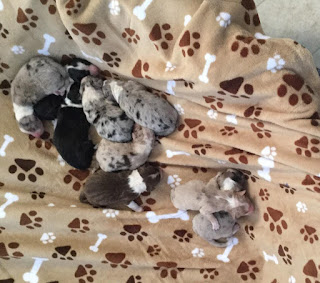 wow; where did the year 2017 go?  Christmas day we welcomed Hawk/Mercedes' litter.  7 males and 2 females.  see www.naritafarmsaussies.com for details.  The two pups at the bottom right are the females.
Read more